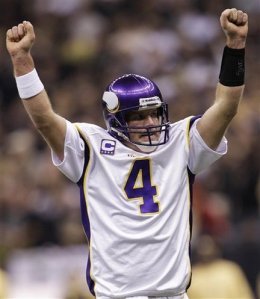 He ages like a fine wine. Never uncorking before it’s just the right time for him. Brett Favre’s retired three times and is back for another go ’round. His 20th season in the NFL, second with the Minnesota Vikings. I’m pretty sure this is REALLY it. Honestly, if he decides to come back next year, I’d welcome him with open arms AGAIN.

Favre tops every major quarterbacking category in the NFL record books. He had one of his best statistical seasons last year guiding the Vikings to within an interception of the franchises first Super Bowl in 33 years. Favre launched for over 4,000 passing yards, 33 touchdowns and just seven interceptions leading the Vikings to a 12-4 record, an NFC North Title and the NFC Championship Game they gave away to the eventual Super Bowl Champion New Orleans Saints.

In question for this season, a surgically repaired ankle that got battered in the championship game loss to the Saints. Bone spurs were removed in May and Favre said if it weren’t healed enough, he’d stay retired. Well, it seems to be moving along in the right direction.

It certainly isn’t about the money for Favre who’s got plenty of it. A possible $20 million for this season doesn’t hurt however.

Favre did need the coaxing of three of his best pals on the Vikings to return. Kicker Ryan Longwell, offensive lineman Steve Hutchinson and defensive end Jared Allen all flew to Mississippi and accomplished their goal of getting a YES from Favre.

Good for them. I would’ve done the same thing considering that without Favre, the Vikings are a mediocre team. With him, they’ve got a legitimate shot at winning a Super Bowl. All four also decided to forget worrying about wins and losses and a Super Bowl run. They just want to have fun because money isn’t an issue with any of them any longer. Win or lose, Super Bowl or no Super Bowl, this is the last stand.

ESPN NFL analysts Tedy Bruschi and Antonio Pierce voiced their disapproval at the mission by the three Vikings saying they’ve lost respect for them because they basically begged Favre to come back and play.

GIVE ME A BREAK!!

Let’s remember, Bruschi, the former New England Patriots linebacker’s got three Super Bowl rings and ex-New York Giants linebacker, that would be Pierce, has one as well. Guess what. Longwell, Hutchinson, Allen and the rest of the Vikings have no “bling” what-so-ever and are running out of time.

Bruschi, Pierce and the rest of you, who claim to be sick and tired of Favre’s selfishness regarding his playing status over the past four pre-seasons, get over it! How selfish of all of you! Bruschi and Pierce only wish they could un-retire and play again.

Former Viking QB and Hall-of-Famer Fran Tarkenton went to three Super Bowls losing all of them. In his mid-60’s, he’s said many times what he wouldn’t do to strap on a helmet one more time and go for a Super Bowl ring.

As far as I’m concerned, barring serious injury, Favre could probably play until he’s 50 and have a shot at winning it all. It’s not like he’s a washed-up shell of his former self like Johnny Unitas was when he left the Baltimore Colts and got battered in his one year with the San Diego Chargers. Favre is still one of the top 10 quarterbacks in the league.

In his first press conference at the Vikings training facility Wednesday Favre, who’ll be 41 in October, said,

I’ve done it all. There’s nothing left for me to prove. I’m here to have fun and help these guys win.

Nothing wrong with having a little fun with a chance to win and go out on top of the pro football galaxy.

So, win or lose, Super Bowl or no Super Bowl, enjoy Favre’s last stand. He’s still one of those players I’d pay to see play because he can still get it done.

It’s been about six weeks since I posted anything on my blog. I’m sorry about that and thank all of you who continue to hit me up for my views on the sports world.

Along with someone I dearly love, I experienced something so devastating I figured there were more important things in life than chiming in about LeBron leaving Cleveland to take his talents to South Beach.

I really don’t want to get into it, but, along with the death of my father, this was the most devastating event of my life. More so than me losing toes or a colon (see CCFA in right hand column). In that respect, I’m fine. Let’s just say, I keep getting reminders of what’s important in life. I can handle it.

All of you are important in my life. So, let’s enjoy it.

Taking into consideration this devastating event I experienced, I’m thinking hard about becoming a Rams fan again. Those of you who know me know I was a die-hard Los Angeles Rams fan back in the day. Beginning at 10 years old, through thick and thin, 0-16, 12-4, I loved them!

Like many other L.A. Rams fans, I felt I was stabbed in the back by Georgia Frontiere when she picked up the team and moved it to St. Louis and, all the while, “Madame Ram” STILL lived in Bel Air. Well, she’s gone now having passed away a few years ago.

Be it in Los Angeles, Anaheim or St. Louis, the guys who suit up in the “blue & gold” have no say where they play. They just want to play.

I’ll let you help in my decision. Let me know if you think it’s time for me to bury the hatchet (nice use of a cliché) and root for the Rams once again.

The season kicks off in three weeks. So, let me know by leaving me a comment with a “yea” or “nay” and why it‘s time to follow them, or not.

Thanks again, for continuing to enjoy my blog and being part of my life.

FINALLY!! The NFL was the only league of any kind that had an overtime rule where it was not only possible, but probable, one of the two teams battling for the win in sudden death might not even see the ball on offense. The stat was true 60%  of the time since 1994.  Six out of 10 teams that won the overtime coin-toss, either, returned the opening kickoff for a touchdown to end the game, marched down the field to score a touchdown to end the game, or marched about 40 yards down the field to kick the game-winning field goal.

THAT WON’T HAPPEN AGAIN………at least during the playoffs.

The sudden death rule was ridiculous, especially when you consider both teams battled hard to the stale-mate and one team would be denied to match, or beat, the coin-toss winning teams score.

Here’s the new overtime playoff rule agreed to by 28 of the 32 owners Tuesday:

That works for me. Consider last year’s NFC Championship Game. Tied at 28 after regulation, the eventual Super Bowl Champion New Orleans Saints won the coin toss and marched about 40 yards. Saints kicker Garrett Hartley sent New Orleans to the Super Bowl connecting on a 44 yard field goal dropping the Minnesota Vikings, 31-28. Brett Favre and the Vikings offense, who had double the yardage of the Saints in regulation, never saw the ball again. Had this new rule been in effect, Favre would’ve had the opportunity to tie or win the game. A shot the Vikings earned.

I’ve got to agree with ESPN NFL analyst Mike Golic. He says this is quite an improvement over the old sudden death rule. But, according to Golic, not good enough. Golic suggested  a complete 15 minute quarter should be played until the final gun. The score at the end of the overtime period is the final…..unless both teams are still tied. In which case, you continue playing overtime periods removing three minutes for each extra quarter played until a winner is decided. In other words, after the initial 15 minute overtime is still dead-locked at its conclusion, the following O.T. quarter is cut to 12 minutes….and so on until a winner is clearly decided. If after five O.T. periods both are still dead-locked, then you go to sudden death. I like it.

Talk about “edge of your seat playoff excitement”. That sounds like the ultimate. Maybe, down the line that’ll be the O.T. rule. Now, at least both teams will have a shot.

Only thing I don’t like about the rule change is that it isn’t part of the regular season. Games tied after regulation will still be decided by the old “sudden death” format. That’s going to be a huge flaw if a teams playoff chances hinge on the one game decided in “sudden death”. That is, essentially, a playoff game.

Modify the new rule for the regular season. Have a complete, 15 minute overtime period. If both teams remain tied after the O.T. quarter, then go to the “sudden death” format with the first team scoring, be it a field goal or touchdown, winning the game. Maybe, down the line. We’ll see.

By the way, one of the four teams to vote against the new playoff overtime rule, the Minnesota Vikings. Go figure.