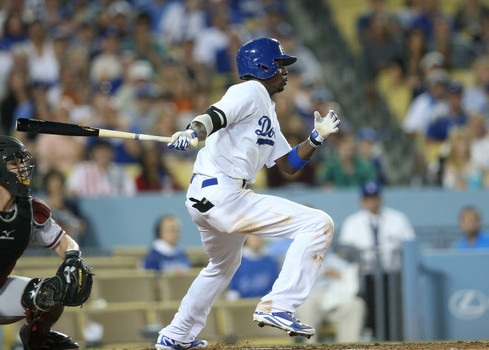 The sense of urgency the Los Angeles Dodgers are feeling with three weeks left in the regular season is an absolute real one.

That’s because their lead was just two games ahead of the rival San Francisco Giants in the N.L. West prior to Saturday’s action and with the G-Men beating the Detroit Tigers, 5-4 earlier in the day, the Dodgers faced a must-win situation hosting the second of a three-game set against the Arizona Diamondbacks.

The Dodgers are feeling the heat and continue to cook.

Adrian Gonzalez hit his 20th homerun of the season in the first inning with a runner on and Dee Gordon drove in the winning run on a two-out rbi single in the 8th as Los Angeles forged a 5-2 win over Arizona and stays two games up on the Giants.

Starter Hyun-Jin Ryu kept Arizona off the board through six innings, including in the second when the first three batters got aboard.

With the bases loaded and no one out, Ryu got Nolan Reimold to strike out. Carl Crawford made a diving catch in left for the second out robbing Tuffy Gosewich of some rbis. Then Ryu got Chase Anderson to strike out on a foul tip.

Threat averted and Ryu was sailing until he surrendered to runs in the top of the seventh tying the score at two-apiece.

The bullpen held and the Dodgers broke through in the eighth for three more runs including the game-winner from Dee Gordon who drove in one of the “September call-ups” – Roger Bernadina making his debut as a pinch-runner for the 3-2 lead.

Reliever Brian Wilson got the win while closer Kenley Jansen recorded his 41st save.

The finale of the three-game set is Sunday at 1pm.