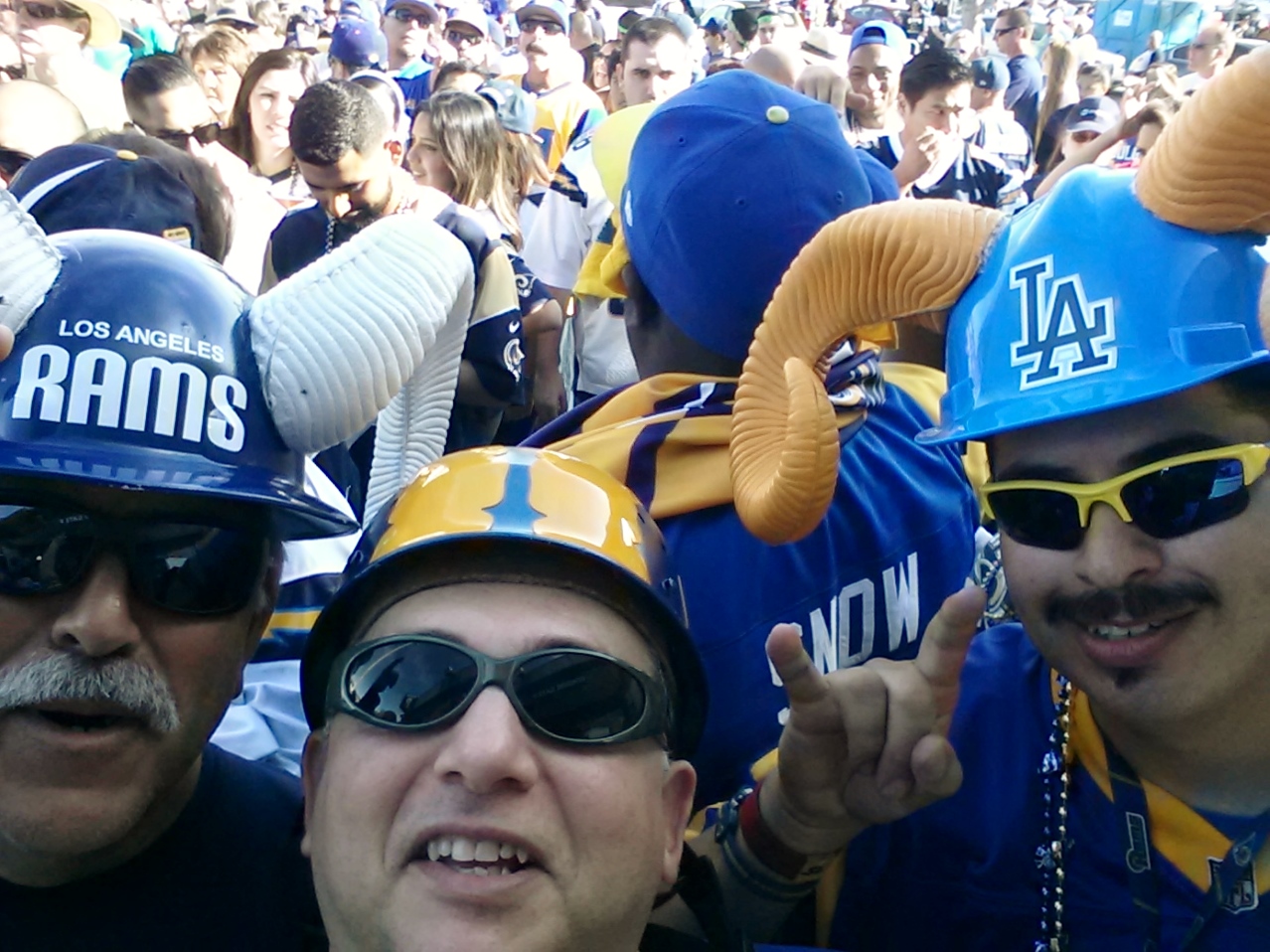 Since attending the very last Los Angeles Rams home game as a loyal fan on Christmas Eve 1994, I can count the fingers on one hand the number of NFL games I’ve attended as a fan or media member.

As a member of the media I worked Super Bowl XXXII won by Denver over Green Bay in San Diego in January of 1998 —the final Broncos home game at old Mile High Stadium in Denver on “Christmas Eve, Eve” 2000– the Broncos first home game at the new Mile High Stadium September 10th 2011and, as a fan along with my wife, attended the San Diego Chargers final pre-season game of 2009.

The one for the thumb occurred Sunday, November 22nd as a fan, back in San Diego at Qualcomm Stadium, to watch the Chargers host the St. Louis Rams. The very same Rams I grew up with and considered part of my family up until the day they announced they were leaving for the Midwest not long after that 24-21 Christmas Eve ’94 loss to the Washington Redskins at Anaheim Stadium.

The first Rams game I attended in person in 19 years, 11 months.

When I was a kid in the 70s my Father, Henri, designed clothes for then-L.A. Rams owner Carroll Rosenbloom, general manager Don Klosterman, head coach Chuck Knox and some players. They were around my Dad’s store in Beverly Hills all the time so that made them my family. And when they were there, so was I.

The Rams are the leaders among three teams with stadium issues in their current homes favored to relocate back to Los Angeles as soon as next season. The other two are the Oakland Raiders and, ironically, the Chargers.

Led by the Southern California Rams Booster Club  – the largest Rams booster club in the world – and the Bring Back the Los Angeles Rams movement, other Rams booster clubs from up and down California as well as Arizona and Seattle, Washington – that’s right, Seattle – organized and planned for a Los Angeles Rams takeover of the “Q” as soon as the schedule came out last year.

It was an opportunity for L.A. Rams fans to relive some memories. Let’s not forget the Rams called Southern California home – playing at the Coliseum then the Big A – for 49 years prior to the move east.

It was also an opportunity to show Rams owner Stan Kroenke he has an L.A. fan base ready to support the team should he relocate them back to L.A.

Needless to say, the L.A. fans took full advantage of that opportunity.

According to the San Diego Chargers they sold some 20,000 tickets to Los Angeles Rams fans. Add those tickets bought through independent ticket agencies like Stub Hub – which is where I purchased my ticket – upwards of 35% to 40% of the 66,000+ football fans in the stadium for Sunday’s game were Los Angeles fans of the St. Louis Rams.

About an hour prior to kickoff Kroenke and Chargers owner Dean Spanos were having a conversation near the Rams bench. Rams fans from L.A. began chanting “Bring them home, Stan!” and “L.A. Rams!” He heard every chant.

Sitting in my seat right behind the west end zone I was stunned to see so much old school regal blue and sun gold jerseys, hats t-shirts and anything Rams from the L.A. days around that stadium. So were the Chargers fans.

L.A. fans of the Rams took over the sections behind the Rams bench from end zone to end zone. Directly behind the bench banners with single letters spelled out:

All this was not missed by those players who played to the crowd throughout the game as well as the Fox television cameras and commentators. It was a playoff atmosphere.

Similar looking to the Big A, being at the “Q” reminded me of those Sunday afternoons spent at Anaheim Stadium watching the Rams “back in the day.” Ram fans on every seating level and every deck.

When they left for St. Louis I felt betrayed and indifferent from then on when watching them play. I was told they moved because we, I, didn’t support them because of the many things to do in Southern California. A complete slap in the face to my loyalty and love for the Rams, win or lose.

Well, if that were the case, if we hadn’t supported the Rams because of the many things to do around here on a Sunday afternoon it stands to reason ex-owner Daniel Reeves – who brought the Rams to L.A. from Cleveland in the mid-40s – would’ve moved the team within five years. He didn’t and the Rams were here for 49 years.

Current Rams owner Stan Kroenke saw that love and loyalty for the team on full display on Sunday. For the Ram fans from L.A. doing all the chanting at the “Q” on Sunday, the takeover was a success.

To the NFL, the St. Louis Rams and the naysayers around the country who say L.A. never supported and won’t support a team, you’re wrong.

The Rams lost the game in a heart-breaking fashion they used to do often when they called L.A. home. With a chance to win late in the game, they turned the ball over losing 27-24.

For the Los Angeles fans of the St. Louis Rams, it was a win. Their message was heard loud and clear. They got plenty of T.V. time visually and audibly. They – WE – could be rewarded with a return of the Rams as soon as next season. A perfect time for a Golden Anniversary Celebration.

Your comments are always greatly appreciated.