Remember, use my picks to wager $$$ at your own risk. If you lose, I had nothing to do with it. If you win beaucoup $$$, a 10% tip would be cool.  But, I’m realistic. This is just for your entertainment…or not, and for me to keep my sports “mojo” going until “I’m back in the saddle”. Remember the league’s unofficial motto…“ON ANY GIVEN SUNDAY, MONDAY, THURSDAY, FRIDAY OR SATURDAY“………… 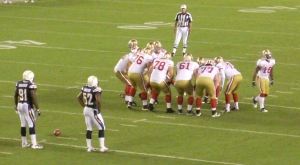 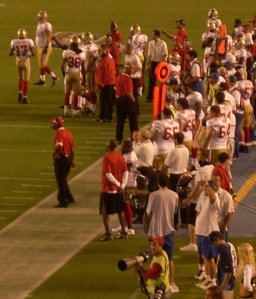 DIVISIONAL ROUND
SAN DIEGO over Cincinnati

What a kickoff to the new season. A rematch of last year’s NFC Championship Game won, of course, by the Saints in overtime. Statistically speaking, the Vikings outplayed the Saints. The difference, five turnovers by the Vikings including two fumbles by Adrian Petersen and two interceptions by Brett Favre. Otherwise, it’s the Vikings who go to the Super Bowl to take on the Colts.

This game isn’t for all the marbles. Win or lose, both teams play next week, and it’s just the first game of the season between two teams that figure to be in the Super Sweepstakes this season. It’s going to be a close game. But, since the game’s in the Big Easy with the Saints hoisting their Super Bowl banner to the SuperDome rafters, that’ll be hard for Favre and the Vikings to overcome who are nursing injuries at the wide receiver position. Drew Brees and the Saints, healthy and ready to go, will continue last year’s celebration by putting a show on for the home folks. SAINTS

Mike Martz, the architect of the “Greatest Show on Turf” St. Louis Rams, joins DA BEARS as the offensive coordinator because QB Jay Cutler was, well………offensive last season. Bears also added former Vikings running back Chester Taylor to team up with Matt Forte. On defense, Julius Peppers was signed to add some bite to the “D”. Meanwhile, the Lions are young and getting much better. QB Matthew Stafford was solid in his rookie campaign. He’ll throw to Calvin Johnson and newcomer Nate Burleson. Rookie running back Jahvid Best should keep defenses off Stafford. And speaking of defense, the Lions took Nebraska tackle Ndamukong Suh with the second overall pick. Reminds me of the Cowboys of the 1990s drafting Troy Aikman, Emmett Smith, Michael Irvin and some huge defenders. They won three Super Bowls in four years. Watch out for Detroit in the next few years. Just not today. BEARS

Titans started last season 0-6. Replaced Kerry Collins with Vince Young at QB who won five straight but it was too little, too late. Teamed with running back superb Chris Johnson and that always solid Tennessee defense, you can bet the Titans won’t start the season “six-feet under”. Here’s a question. How is Tom Cable, laughed out of Moscow after coaching the University of  Idaho into a hole, still the head coach of the Raiders? Maybe he wasn’t a good recruiter. The Raiders are tough on defense and finally have a quarterback that can drive the bus. Jason Campbell was brought in from Washington after the Redskins acquired Donovan McNabb. Campbell’s a huge improvement over former top overall draft pick JaMarcus Russell who couldn’t find a gig with a pee-wee team if  he asked. Campbell’s in his fifth season and working under his fifth offensive coordinator. He’ll be fine. He’s got a ground game to work with in Michael Bush and Darren McFadden and the Raiders have some “D”.  TITANS

LEGGO MY EGO!!!! Plenty of them to go around in this one. Chad Ocho-Cinco and Terrell Owens catching passes via Carson Palmer for the Bengals. Randy “Feeling Under-Appreciated” Moss catching bombs from new gazillionaire (and father) Tom Brady!  I GOTTA SEE THIS ONE!! What’s the over/under?……..45.5. OH, TAKE THE OVER!!! PATRIOTS in a close one.

Giants open the brand new, $1.6 billion stadium they co-own with the Jets on the weekend of the ninth anniversary of the 9/11 attacks. Both teams finished 8-8 last season with the Panthers closing out old Giants Stadium with a 41-9 rout of the G-Men. A little payback for Eli Manning and the G-Men. Former UCLA/Oregon St. QB Matt Moore starting  for the Panthers. No Julius Peppers on defense for the cats. GIANTS.

The Falcons are my “sleeper team” from the NFC for the Super Bowl. Matt Ryan at QB. Michael Turner at running back. Wr Roddy White.  Tony Gonzalez at Tight End. A mean defense. Year three of the “Ryan Regime”….could be. Just Sayin’! Meanwhile, the Steelers will be without QB Ben Roethlisberger serving a four-game suspension for acting inappropriate with a young lady at a night club. I’ve worked in night clubs….WHAT DO YOU EXPECT!!! Anyway, Dennis Dixon will drive the Steelers until “Big (that’s what the ladies say) Ben” returns for week five. Steelers’ D is always tough, but getting older. FALCONS

If this game ISN’T blacked-out in the Tampa area, much respect to the folks on the Gulf side of Florida. Well….considering the BP mess in the Gulf, I would rather see a bad football game than go swimming. Jake Delhomme the new target at QB for the Browns. Josh Freeman had a solid rookie season calling signals for the Bucs. BUCCANEERS.

If not for an impending lockout and likely cancellation of the 2011 NFL season, this could be the Los Angeles Jaguars (Dons?) opener at the L.A. Coliseum while the new L.A. Stadium is being built in the City of Industry. No one’s moving or paying until the new Collective Bargaining Agreement is signed, sealed and delivered. No worries. This game’s as good as the Cleveland/Tampa Bay tilt. JAGUARS

It’s been seven months since the Colts lost the Super Bowl. Peyton Manning and his team have set their sights on playing in Dallas in February. The Houston Texans just want a win against their AFC South rivals. The Colts have won 15 of 16 games against the Texans. Houston knows it needs to beat Indianapolis if it wants to make the playoffs as a division champion or wild card. Texans QB Matt Schaub throws to, arguably, the league’s best receiver in Andre Johnson. That duo better work because Houston can’t run worth…..you know. If Schaub has issues, the Texans signed Matt Leinart who was cut last week by Arizona. Leinart can play and he wants to prove the Cards dealt him a bad beat. On defense, Mario Williams is a beast. But, he can’t do everything. LB Brian Cushing is serving a four-game suspension for testing positive with the dreaded HGH’s . Colts have a healthy Bob Sanders and Dwight Freeney on defense. COLTS

The Rams are living by the late George Allen’s creedo…THE FUTURE IS NOW!  Especially since you won just one game last season and  you’ve guaranteed a kid $50 million smackaroos. Rookie Sam Bradford, the top overall 2010 draft pick, will start at quarterback for the Rams. He looked like a seasoned veteran in the pre-season…..but that’s exactly what it was. Bradford resembles another pretty good Rams signal-caller, Roman Gabriel. If he plays as well as Gabriel, it should be interesting.  Bradford can remove some pressure by handing off to, who I think is the best running back in the league, Steven Jackson. Rams have a rebuilding offensive line, yet Jackson rushed for 1,416 yards last season and went to the pro bowl. As for the Cardinals, does that say Derek Anderson is your starting quarterback? COME ON, MAN! Anderson was terrible in Cleveland and beat out Matt Leinart who was cut last week. He’s fortunate to have Larry Fitzgerald catching passes. He can also hand off to Beenie Wells and Tim Hightower. Just two years removed from a Super Bowl appearance, I think the Cards are folding. Bradford and the Rams will be jacked up. RAMS

Everyone’s on the NFC East Champion Dallas Cowboys Super Bowl bandwagon. Not me. Plenty of talent. But an average quarterback. Yeah! I still believe Tony Romo’s the most over-rated QB in league history. When he’s flustered, he can’t deliver. Stats are nice, but when you can’t finish in “winning time” (see Roger Staubach and Troy Aikman) you’re no better than Quincy Carter. Including last year’s champion Saints, teams have gone from worst to first the last seven seasons. If there’s a team to make it eight straight, it’s the Redskins. Give me coach Mike Shanahan with a proven winner at QB, Donovan McNabb, a solid running game and a top-10 defense, Albert Haynesworth or no Albert Haynesworth, and I’ll take the Redskins. Don’t think they’ll win the division, but they’ll win this one. REDSKINS

Let’s see. The Ravens have a talented, young QB in Joe Flacco.  A bruising running game with Ray Rice and Le’ Ron McClain, a bevvy of wide receivers including Anquon Bouldin and T.J. “who’s your daddy” Houshmanzadeh, and a perennial monster-defense led by Ray Lewis. The Jets have a bunch of former Ravens including head coach Rex Ryan, the league’s top defense, anchored by the just signed Derelle Revis “Island” and a running game that includes former Charger LaDanian Tomlinson and a young stud quarterback in Mark Sanchez. THIS SHOULD BE GOOD! It’s at the new New York/New Jersey Stadium the Jets co-own with the Giants. Talk about “Hard Knocks” (see HBO). The Ravens are my AFC Super Bowl pick. They’ll win a low-scoring, close dog-fight. Take the under. RAVENS.

Ex Notre Dame coach Charlie Weiss and ex Browns coach Romeo Crenell have joined the KC coaching staff making the Chiefs a “sexy pick” to dethrone the Chargers as AFC West Champs. Uh…..yeah…NO!! It’s New England Patriots “MidWest” in KC but it won’t change anything just yet. San Diego let franchise legend LaDanian Tomlinson go. He of course signed with the Jets.  The Bolts replaced him with “LT carbon-copy”, rookie Ryan Matthews out of Fresno State. This guy’s the real deal. He’ll give QB Phillip Rivers time to find receivers down field. Still too much fire-power on offense and superior defenders anchored by LB Shawn Merriman for San Diego. Chargers seem to start seasons poorly and gain steam after about six games. This season, San Diego starts strong and doesn’t let up until a January date in Baltimore. CHARGERS

Ugh. For explanation, see Denver-Jacksonville game synopsis. Also, Stan Kroenke, a member of the committee to bring the NFL back to Los Angeles, is now the new owner of the St. Louis Rams who don’t have much loyalty in the Gateway City and need new digs to play in. Haven’t I heard this story before. Could it be….is it possible….yeah, it’s possible. But that damn CBA is a thorn in my side! Luckily, the Rams can opt out of their lease in the STL in 2014. By then, a new stadium in the City of Industry could be ready for a 50th anniversary party (Rams were in L.A. 49 years before (gulp) Georgia moved them to St. Louis). Stay tuned.

2 thoughts on “Are YOU Ready For Some….You Know…”